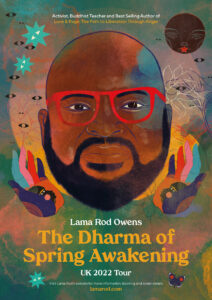 Lama Rod Owens is a Buddhist minister, best selling author, activist, yoga instructor and authorised Lama, or Buddhist teacher, in the Kagyu School of Tibetan Buddhism and is considered one of the leaders of his generation of Buddhist teachers.

He holds a Master of Divinity degree in Buddhist Studies from Harvard Divinity School and was included in the 2021 GOMES STB ’68 Distinguished Alumni Honorees List. He is the co-author of Radical Dharma: Talking Race, Love and Liberation. Owens is the co-founder of Bhumisparsha, a Buddhist tantric practice and study community.

Lama Rod has been featured on Good Morning America, the BBC, and Sirius XM Radio Urban View. He has also been featured in the Washington Post Magazine and published in
Buddhadharma, Lion’s Roar, Tricycle and The Harvard Divinity Bulletin.

He has offered talks,
retreats and workshops in more than seven countries. A book for these times, ‘Love & Rage: The Path to Liberation Through Anger’ was published in June 2020 and featured in the L.A Times Top Ten Best Sellers list for 2021. Critically acclaimed for its prophetic truth, timing and honesty and wisdom, in dealing with the multiplicity of challenges this generation is waking up
to.